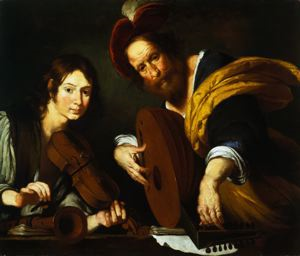 
This scene of a middle-aged lute player and young violinist illustrates many qualities of Baroque art. Both musicians look directly out from the painting, their eye contact and lively expressions establishing a sympathetic psychological relationship with their audience. A parapet that separates performer from spectator links imaginary and actual space; dramatic lighting, naturalistic details and richly saturated colors all merge to intensify the viewerâs visual experience.

The meaning of Two Musicians leaves much to the imagination. The two figures here could suggest a contrast between naÃ¯ve youth and experienced age; the violin and the lute both refer to ideas of balance and harmony. Concert scenes sometimes symbolize the sense of hearing or the idea of harmony and love. Whatever the interpretation, these paintings of concerts were, like the music they represent, extremely popular with their public during the Baroque period.

As a young man, Strozzi entered a monastery where he painted religious subjects. After his fatherâs death, he was allowed to leave the monastery to support his mother; he refused, though, to return after she died and was forced to flee his native Genoa. In 1631, he settled in Venice, where he became a Roman Catholic prelate, or church official. He enjoyed continuous success as a painter for the rest of his life.

Marks
Circular stain or remnant of old label at one corner of back of stretcher.

Provenance
Conte Giacomo Carrara, Bergamo; his bequest to the city of Bergamo for the foundation of the museum of the Accademia Carrara, Bergamo, 1796 [catalogued in their unpublished collection catalogue of 1796]; sold by them in the early nineteenth century; Genoese private collection; Pietro Accorsi, Torino (dealer); sold by him to Nicholas Acquavella, New York (dealer), 1953; purchased from him by the Gallery in 1953
Keywords Click a term to view the records with the same keyword
17th century
musical instruments (depictions)
musicians
1600-1800
paintings
Additional Images Click an image to view a larger version

Exhibition List
This object was included in the following exhibitions:
Bibliography
This object has the following bibliographic references:
Portfolio List Click a portfolio name to view all the objects in that portfolio
This object is a member of the following portfolios:
1600 - 1800
17th Century European Art
All Paintings
Baroque Art
Fountain Court
MAG Favorites
MAGhomepagerotation
Many Faces, Many Places
Music
Objects with Incomplete Nazi-Era Provenance
Promenade: A Musical Procession Through Paintings at the Memorial Art Gallery
Selected Gould Fund purchases
Web Links See links to web pages and lesson plans
Promenade VII Excerpt from Promenade VII, improvised by Edoardo Bellotti on the Italian Baroque Organ, to accompany this painting.

Your current search criteria is: Object is "Two Musicians".