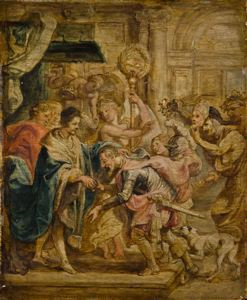 
In 1622 Marie de' Medici commissioned from the internationally famous painter Rubens two series of enormous paintings to decorate the Luxembourg Palace in Paris, where she then lived. The first series, now in the Louvre, told her own life story. The second was to tell the life of her husband Henry IV, but was never completed, and most of the scenes are known only from painted sketches like this one. The event here is a 1589 meeting between King Henry III of France (Catherine de' Medici's youngest son) and King Henry of Navarre, the future King Henry IV of France.

Henry III had no heirs, and a rival faction of French nobles who wanted to usurp his throne had taken over Paris. His cousin Henry of Navarre, although Protestant and excommunicated by the Pope, was the rightful heir. At the meeting portrayed here, Henry III promised to declare Henry of Navarre his heir, if the famous warrior king would help him to recapture Paris. To symbolize the agreement, Rubens shows the two kings clasping hands around the royal French scepter and a figure behind them holding an insignia of two clasped hands. A few months later, Henry III was stabbed by an assassin. On his deathbed, he made Henry IV promise to convert to Catholicism. Henry IV's famous comment was "Paris is well worth a mass" ("Paris vaut vien une messe").

Exhibition List
This object was included in the following exhibitions:
Bibliography
This object has the following bibliographic references:
Portfolio List Click a portfolio name to view all the objects in that portfolio
This object is a member of the following portfolios:
1600 - 1800
17th Century European Art
All Paintings
History in Art
Men
Objects with Incomplete Nazi-Era Provenance

Your current search criteria is: Object is "The Reconciliation of King Henry III and Henry of Navarre".