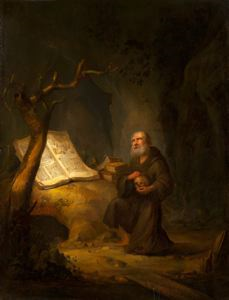 
After studying for three years with Rembrandt, Dou established himself as an independent painter, achieving wealth and fame in his native Leiden. He specialized in small, highly finished genre scenes that delight by their precise reproduction of everyday objects. Meticulous realism and enamel-like surfaces also typify Douâs portraits and religious pictures, such as St. Jerome in the Desert.

This painting integrates the two most common pictorial motifs associated with this saint, who was both a scholar of the Bible and an ascetic known to have spent long sojourns in the desert.

St. Jerome, born to a wealthy pagan family, converted to Christianity around 365 CE. A theologian by training, his major work was the Vulgate translation of the Bible, which is still in use today. He lived for years as a hermit in the Syrian desert, and, after a scandal in Rome, returned to his life of desert solitude. He lived the last 34 years of his life in the Holy Land as a semi-recluse. In this painting, St. Jerome is shown in prayer and meditation during one of his desert sojourns. The numerous books refer to his life as a scholar of the Bible; the skull symbolizes the transience of life.

Portfolio List Click a portfolio name to view all the objects in that portfolio
This object is a member of the following portfolios:
1600 - 1800
17th Century European Art
All Paintings
Judeo-Christian Art
Men
Storytelling with Art

Your current search criteria is: Object is "St. Jerome in the Desert".