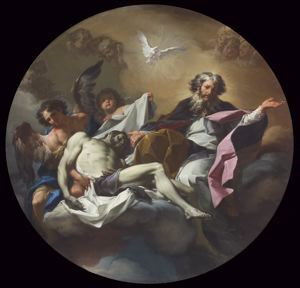 
âThe Holy Trinity,â the concept that there are three Persons in the unity of God, is the central doctrine of the Christian religion. Although these three Personsâthe Father, the Son and the Holy Spiritâare distinct from each other, the Christian faith holds that there are not three gods but one. In Christian art, three elements represent the Trinity. The image of an older patriarch refers to God the Father; God the Son, or Christ, is usually shown either crucified on a cross or, as in this painting, after his death; and the Holy Spirit appears as a dove in flight.

During the Counter-Reformation, images of the Trinity emphasized the physical nature of Christ by focusing on his suffering and death. Like other dramatic works of Counter-Reformation art, the intent was to evoke an emotional response from the faithful that would lead to increased devotion.

This painting is one of several variations of Giaquintoâs Dead Christ with the Trinity (1741-1742), a fresco he painted in the apse of S. Giovanni Calibita in Rome.

Provenance
[Cardinal Aldovrandi-Marescotti, Bologna?;] Somerville & Simpson, London (dealers); purchased from them by the Gallery in 1981
Keywords Click a term to view the records with the same keyword
European art
Additional Images Click an image to view a larger version

Your current search criteria is: Object is "The Trinity".