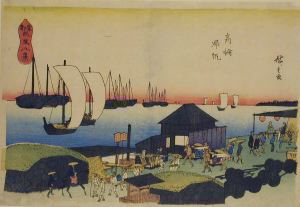 
"Returning Sails at Takanawa" adapts the classical trope of "Returning Sails at a Distant Bay" (enpo kihan) to the well-known view of Edo bay along a stretch of the TÃ´kaidÃ´ Road at Takanawa in the Shiba district of Edo. Smaller boats with white sails ferry goods to shore from the large dark ocean-going vessels anchored in the bay. In the unceasing traffic along the TÃ´kaidÃ´ Road, the major highway leading in and out of the city to the south, we see a mounted samurai and his servant in the lower-left corner passing through the granite sides of the gated portal to the city. Coming towards them is a group of pilgrims dressed in white, followed by two more samurai borne in palanquins, and another two palanquins are parked at the side of the teahouse. Large hand-carts for carrying building materials are seen in the lower right-hand corner, while at the right workers appear to be building a larger restaurant or teahouse. Two sign-boards next to a mile-post at the seating area carry official regulations pertaining to travelers entering Edoâthese signs were a common sight at every bridge and approach to the city, along with the heads of executed criminals.

Bibliography
See general mention in Shozaburo Watanabe, "Catalogue of the Memorial Exhibition of Hiroshige's Works on the 60th Anniversary of his Death," 1918, p. 27; cat. no. 115 describes the set, Eight Views of Shiba, Yedo. [See http://www.hiroshige.org.uk/hiroshige/watanabe/catalogue_103_133.htm, no. 115.] This print is entitled "Takanawa Kihan" or "Boats Sailing Back at [to?] Takanawa."
Keywords Click a term to view the records with the same keyword
Japanese
horses
seascapes
1800-1900
boats
woodcuts
Ukiyo-e
Additional Images Click an image to view a larger version

Exhibition List
This object was included in the following exhibitions:
Portfolio List Click a portfolio name to view all the objects in that portfolio
This object is a member of the following portfolios:
1800 - 1900
All Graphic Arts
Animals in Art
Japanese Art
Relief Prints
Seascapes
Transportation
Web Links See links to web pages and lesson plans
Catalogue of the Memorial Exhibition of Hiroshige's Work Online version of Shozaburo Watanabe's book: Catalogue of the Memorial Exhibition of Hiroshige's Work on the 60th Anniversary of his Death, Tokyo: Ukiyoye Association, 1918. This work is listed under catalogue no. 115, Takanawa Kihan, Boats Sailing Back at Takanawa.

Your current search criteria is: Portfolio is "All Graphic Arts" and [Object]Period is "Edo Period (1600-1868)" and [Objects_1]Sort_Artist contains "Ando Hiroshige".