Portrait of a Child with a Dog 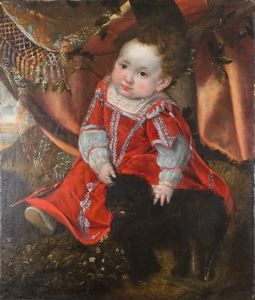 Portrait of a Child with a Dog


Portraits often include visual elements similar to those used by other painters of the period. The landscape and the rich drapery behind the child suggest a Spanish origin. Based on these elements as well as the treatment of the childâs face, one scholar has suggested that MAGâs Child with a Dog could be the work of Juan Battista Martinez del Mazo, the son-in-law of the most famous Spanish painter of the mid-1600s, Diego VelÃ¡zquez. After his father-in-lawâs death, Mazo succeeded VelÃ¡zquez as the official painter to the royal family; many of his portraits were of children, and many made use of similar background landscapes and drapery. We believe now that this work is by a painter active among the Spanish nobility during the mid-17th century, a period marked by prosperity and a flourishing of the arts known as Spainâs Golden Age.

Provenance
Private collection, Italy, for 300 years; purchased from that owner by Gertrude Newell (1886-1958), New York and Moumour, France; her gift to Helen C. Ellwanger; her gift to the Gallery in 1964
Keywords Click a term to view the records with the same keyword
17th century
portraits
dogs
children
1600-1800
paintings
Additional Images Click an image to view a larger version

Your current search criteria is: Object is "Portrait of a Child with a Dog".