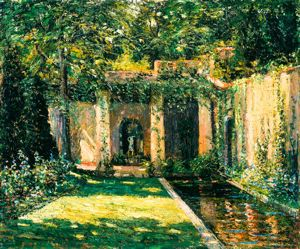 
Object Type: Painting
Medium and Support: Oil on canvas
Credit Line: Gift of the Estate of Emily and James Sibley Watson
Accession Number: 1951.36
Link to this object
Location: Not currently on view


While many early twentieth century American paintings celebrated buildings, bridges and the hustle and bustle of the city, tranquil subjects, including Ashcan artist Ernest Lawsonâs Garden, filled canvases as well.

In documenting a formal garden owned by H.H. Rogers in exclusive Tuxedo Park, New York, Lawson chose rich and vivid colors that evoked the warmth and languor of a summer interlude. The view of the charming teahouse, complete with sculpture, suggests afternoons filled with genteel conversation and desultory reading, or spent drifting off to the sound of lapping water, far removed from the clamor of Lieâs nearby Brooklyn Bridge or Sloanâs Election Night.

Ernest Lawson moved to New York in 1898, and in 1908 he exhibited at Macbeth Gallery with The Eight.

While this garden vista is an uncharacteristically intimate view by Lawson, it demonstrates his intense use of a color palette that was referred to as consisting of "crushed jewels." The painting was exhibited in 1916 at the Memorial Art Gallery, acquired from the exhibition by longtime MAG patrons, the Watsons, and generously donated to the Gallery in 1951. Long thought to be a Rochester garden, the subject was definitively identified by Deirdre Cunningham, the George Eastman House Nancy R. Turner landscape curator, as a garden in Tuxedo Park, New York. The current owners are in the process of restoring the garden, abandoned for many years, to its original beauty.

Provenance
Daniel Gallery, New York; purchased by Mr. and Mrs. James Sibley Watson, Rochester, NY in 1916; given to the Gallery in 1951
Keywords Click a term to view the records with the same keyword
20th century
Ashcan School and friends
landscapes
1900-2000
paintings
Additional Images Click an image to view a larger version

Your current search criteria is: Object is "The Garden".