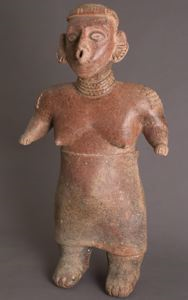 
Beads, armbands, pendants, and ear and nose ornaments have been found on skeletal remains in Ancient American tombs. This Nayarit woman is depicted with nose, neck and ear ornaments and scarification (cutting or branding designs into the skin) on her shoulders and arms. The specificity of adornment would have associated this figure with a particular culture and class. These details contrast with an abstracted body that minimizes certain physical features while emphasizing others. The small, truncated arms are likely a stylistic convention; the wide, heavy hips and legs emphasize the womanâs connection with the earth and reproduction.
[Gallery label text, 2009]

Provenance
Stendahl Galleries, Los Angeles; purchased from them by the Gallery in 1954
Keywords Click a term to view the records with the same keyword
Pre-Columbian art of Central & South America
Additional Images Click an image to view a larger version

Your current search criteria is: Object is "Standing Female Figure".