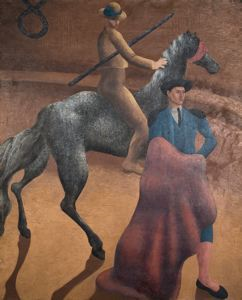 
When he turned 19, aspiring artist Eugene McCown said goodbye to Missouri and made his way to Paris, where he fell into a social circle that included Virgil Thompson, Gertrude Stein, Peggy Guggenheim, Marcel Duchamp and other luminaries of the bohemian scene. In the City of Light, he was able to live openly as a gay man and acquired a reputation as a bon vivant. Itâs unclear how much time he actually spent painting, as only a handful of his works are known today. From existing photographs of those, "The Picador" seems typical in terms of the elongated figures and slightly surreal setting, if not in homoerotic content.

Provenance
Helen Ellwanger, Rochester NY (1885-1982); her gift to the Gallery in 1982
Additional Images Click an image to view a larger version

Your current search criteria is: Object is "The Picador".