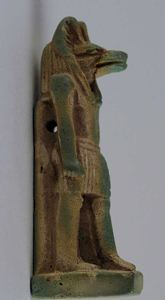 Anubis was the god of mummification and protected the deceasedâs body from harm. Amulets of Anubis would not have been worn as jewelry by the living but would only have been placed in the linen wrappings of the mummy.

Exhibition List
This object was included in the following exhibitions:
Bibliography
This object has the following bibliographic references:
Portfolio List Click a portfolio name to view all the objects in that portfolio
This object is a member of the following portfolios:
1000 BCE - 500 CE
All Decorative Arts
Ancient Egyptian Art
Ceramics
Egyptian Art
Web Links See links to web pages and lesson plans
Protected for Eternity: The Coffins of Pa-debehu-Aset, Gallery Guide Explore the world of Pa-debehu-Aset, and the sacred stories that relate the Egyptian journey to the afterlife. Learn how a mummy is made, and explore reading and writing in ancient Egypt.
Ocumpaugh property at 51-55 Main Street East Note from the Rochester Images project, direct url: http://photo.libraryweb.org/carlweb/jsp/DoSearch?databaseID=716&count=10&terms=19789&index=z

Your current search criteria is: Object is "Amulet of the God Anubis".