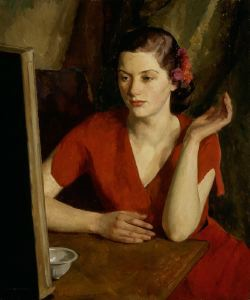 
Ivan Olinksy, a Russian who arrived in New York City at age 13, was for many years the studio assistant of John LaFarge, the celebrated muralist and stained glass designer. After LaFargeâs death, Olinsky became a well-known painter in his own right, and George Herdle included his work in MAGâs inaugural exhibition of 1913. In attempting to trace that painting for the Galleryâs 75th anniversary show, MAG made contact with Olinskyâs daughter and grandsons. Serendipitously, Olinkskyâs great-grandson had just graduated from the University of Rochester, and the family generously donated A New Arrangement to the permanent collection.

Your current search criteria is: Object is "A New Arrangement".