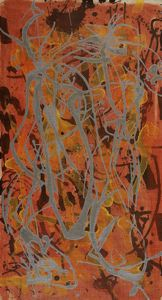 
Jackson Pollock mused âthat the modern painter cannot express this age, the airplane, the atom bomb, the radio, in the old forms of the Renaissance or of any other past culture. Each age finds its own technique.â

His âpouredâ paintings, like the one on view here, have become an emblem of twentieth-century abstract art. Eschewing traditional brushes, easels, and realistic subject matter, Pollock placed his canvases on the floor. He often walked on them as he dripped skeins of paint across their surfaces. Using the movement of his entire body, he got inside his paintings, as he sometimes described his working process. His painting style may appear to be accidental and random, but it was, in fact, controlled and defined.

Marks
Artist's signature, verso: Jackson Pollock 1950/Lee Krasner Pollock 10-58
Per Helen Harrison, Director, Krasner-Pollock House: " 'Jackson Pollock 1950' is an inscription by Lee Krasner. 'Lee Krasner Pollock 10-58' is Lee's signature and the month & year the work was modified. It was exhibited at the Sidney Janis Gallery from 3-29 November 1958."
Keywords Click a term to view the records with the same keyword
20th century
1900-2000
paintings
red
Additional Images Click an image to view a larger version

Exhibition List
This object was included in the following exhibitions:
Bibliography
This object has the following bibliographic references:
Portfolio List Click a portfolio name to view all the objects in that portfolio
This object is a member of the following portfolios:
1900 - 2000
20th Century American Art
All Paintings
Web Links See links to web pages and lesson plans
Modern Art: Who, What, and Why? Materials accompanying a teacher inservice presentation at MAG Spring 2008
Jackson Pollock by Miltos Manetas In this site, Miltos Manetas has created a flash animation that allows viewers to create splash paintings with movements of their mouse.