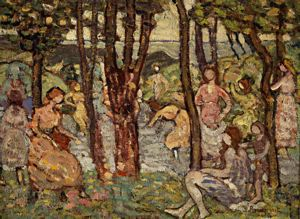 
Despite many differences in style and subject matter, Maurice Prendergast exhibited with the Urban Realist artists in the beginning of the century. His style of breaking up the surface of his paintings with color and light was a shock to American viewers. An art critic wrote in 1908, âHung in a group, these canvases of Mr. Prendergast lookâ¦ like an explosion in a color factory.â
[Gallery label text, 2007]

Prendergast looked to European artists for his inspiration. One of the most modern painters working in America in the first decade of the century, his colors were often applied in post-impressionist daubs, like Seurat, and the space in his works was compressed and unrealistic.

Like Glackens, he enjoyed painting scenes of leisure, particularly bathing scenes like this one. He exhibited in the 1908 Macbeth Gallery show, along with Henri and the others, and while his work had little in common with many of the members of The Eight, he was as interested as they were in defying the conventions that had been established by the National Academy.

Provenance
Bequeathed to the artist's brother Charles Prendergast in 1924; to his wife, Mrs. EugÃ©nie Prendergast, Westport, CT in 1948; purchased by the Gallery in 1963
Keywords Click a term to view the records with the same keyword
20th century
Ashcan School and friends
women
1900-2000
paintings
Additional Images Click an image to view a larger version

Exhibition List
This object was included in the following exhibitions:
Bibliography
This object has the following bibliographic references:
Portfolio List Click a portfolio name to view all the objects in that portfolio
This object is a member of the following portfolios:
1900 - 2000
20th Century American Art
All Paintings
Seeing America
Women
Web Links See links to web pages and lesson plans
Seeing America Inservice Materials from a teacher in-service presentation Spring 2008
Seeing America Chapter on Maurice Prendergast's paintings The Ships and Woodland Bathers, written by Gwendolyn Owens.

Your current search criteria is: Object is "Woodland Bathers".