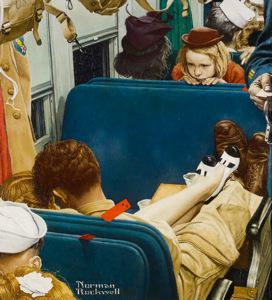 
During World War II, Norman Rockwell painted positive and uplifting scenes of the American homefront. Rockwell, Americaâs most popular illustrator, created "Soldier on Leave" for the [August 12, 1944] cover of the widely-read magazine, 'The Saturday Evening Post.'

Norman Rockwellâs Saturday Evening Post covers have shaped much of the American publicâs imagination about what is American about America. This painting appeared on the magazineâs cover on August 12, 1944, in the midst of World War II. Allied Forces had landed on the beaches of France on D-Day, June 6, two months prior to the magazineâs publication date, and there was reason to believe that the war would not go on much longer.

In the meantime, soldiers were continuing to be drafted and wartime romances were intensified by the threat of separation. The scene in Soldier on Leave was a common story: young lovers take what comfort they can from each other in spite of their lack of privacy, knowing their time together is brief.

Rockwell frequently used Vermont neighbors as models for his paintings. This painting is no exception, and to complete the realistic setting, he posed his models in an actual train that was loaned to him by the Rutland Railroad.

Provenance
Given to Merrill Boynton by the artist; inherited by his son Robert M. Boynton, Rochester, NY; given to the Gallery in 1974
Additional Images Click an image to view a larger version

Exhibition List
This object was included in the following exhibitions:
Bibliography
This object has the following bibliographic references:
Portfolio List Click a portfolio name to view all the objects in that portfolio
This object is a member of the following portfolios:
1900 - 2000
20th Century American Art
Seeing America
Web Links See links to web pages and lesson plans
Seeing America Inservice Materials from a teacher in-service presentation Spring 2008
Seeing America Chapter on Norman Rockwell's Soldier on Leave, written by Karal Ann Marling.
MAGexplore MAGexplore provides in-depth information and close looking at over 200 objects in MAG's collection.

Your current search criteria is: Object is "Soldier on Leave".