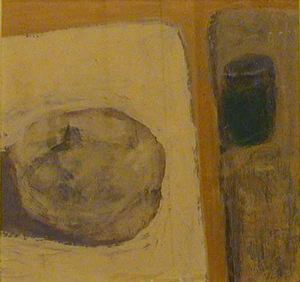 
Object Type: Painting
Medium and Support: Oil on paper mounted to composition board
Credit Line: Gift of Anne Prior Whitcomb
Accession Number: 1994.74
Link to this object
Location: Not currently on view


W. Lee Savage was a painter who achieved later acclaim as a filmmaker and animator, particularly through his work on the pioneering television show Sesame Street. This atmospheric still life, done early in his artistic career, was given to MAG by the widow of its third director, Harris Prior.

Your current search criteria is: Object is "Paint Jar".