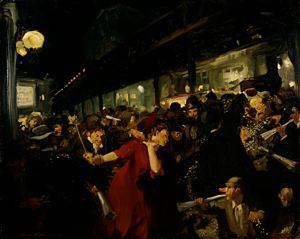 
This scene, nearly unintelligible in its crowding and confusion, is Sloanâs celebration of the furor of the city on election night.
[Gallery label text, 2007]

John Sloan met Robert Henri in Philadelphia, and from early on maintained a friendship and correspondence with him until Henri died in 1929. He moved to New York City at Henriâs urging.

On November 5, 1907, he wrote: âElection Dayâ¦ saw the noisy trumpet blowers, confetti throwers and the 'ticklers' in use - a small feather duster on a stick which is pushed in the face of each girl by the men, and in the face of men by the girls. A good humorous crowd, so dense in places that it was impossible to control one's movement.â The location, Herald Square at 34th and Broadway, was close by the New York Herald Building as well as Macy's. The elevated railroad tracks loomed overhead, increasing the suggestion of noise and activity in the scene.

Sloan included Election Night as one of his entries in the 1908 exhibition at Macbeth Gallery. In his estimation, it was ââ¦one of my best things. So that I felt happy in the evening, that good all over feeling that only comes from satisfaction in work - the real happiness, the joy of accomplishing or thinking that one has accomplished, which amounts to the same thing.â

Your current search criteria is: Object is "Election Night".