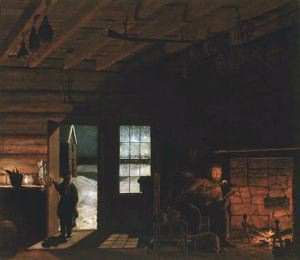 
Home Late is the earliest identified painting by Mortimer Smith. The shadowy interior of the frontier cabin demonstrates his mastery of the genre scene: the rifle hanging from the ceiling side by side with drying meats and vegetables, supper cooking in the kettle suspended in the stone fireplace, and the dog sleeping peacefully by the fire. Smith is equally adept at capturing the warm glow cast by the fire as it contrasts with the cold light of the winter scene beyond the doorway. The child pausing in the doorway heightens the emotional ambiguity of the scene as he surveys the cabin's interior, perhaps to gauge the mood within as he returns home late from skating.

Smith's landscape and genre scenes suggest familiarity with his better-known contemporaries, like Albert Bierstadt and Eastman Johnson. Certainly, early exposure to the work exhibited at the Cosmopolitan Art Association in Sandusky provided Smith with models of painting styles that continued to influence him throughout his life.

Your current search criteria is: Object is "Home Late".