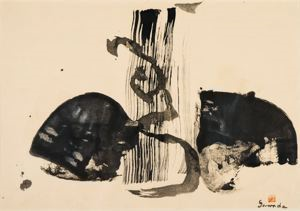 
Tetsuro Sawada was born and studied in Japan. Drafted into the Japanese army in 1945 and detained in Siberia after the war, he returned to his art after his release from prison in 1947. He attained international prominence in January 1960, when he had a solo exhibition at the Meltzer Gallery in New York. His one-man show was reviewed by the well-known New York Times art critic John Canaday, who wrote glowingly that the artist was well on his way to âconverting the abstract idiom of our decades into a generally comprehensible expression of nature.â

MAG purchased three of his works, including Waterfall, directly from the 1960 Meltzer exhibition.

Your current search criteria is: Keyword is "GYPH".