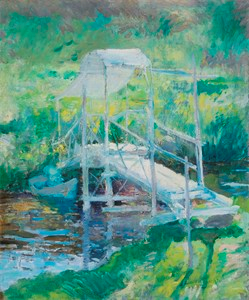 
Impressionism, a radically modern style upon its inception in France in the 1860s, came late to American shores. The Impressionist artist sought to capture impressions of light, color, and shape in a spontaneous way.
[Gallery label text, 2007]

John Twachtmanâs finest paintings were inspired by the beauty of the land on which he lived with his family. Located in Greenwich, Connecticut, the picturesque property included a portion of Horseneck Brook, across which Twachtman built an ornamental but functional footbridge. Here, his children swam in the summer and rowed their boat beneath the bridgeâs arched deck. The bridge may have been inspired by similar structures in Venice, where the artist lived in the 1880s and 90s.

Twachtman was one of Americaâs premier impressionist painters and a founding member of the Ten American Painters, a group that included Thomas Dewing and William Merritt Chase, artists whose works are also on view at MAG. The White Bridgeâs bright colors, energetic brushwork, and light-filled canvas link Twachtmanâs work with that of French impressionist Claude Monet.

Your current search criteria is: Object is "The White Bridge".