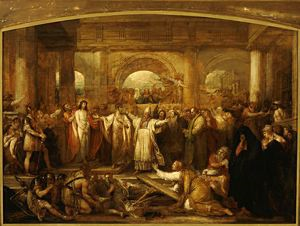 
According to the Christian gospels, Jesus was brought before Caiaphus and his fellow high priests, who rejected Jesus and gave him to Pilate to be crucified. Even today, among contemporary clergy and theologians, there is debate about the historical circumstances of Christ's death.

Benjamin West depicted the traditional narrative in a compressed manner, bringing together elements of the events that were to follow: the crucifix and the instruments of the passion lie in the foreground; Mary, the mother of Jesus, and Mary Magdalene anticipate Jesus' suffering with looks of sorrow and horror; Roman soldiers stand by with spears.

The artist was born in pre-Revolutionary Philadelphia, studied in Italy, and settled permanently in England, where he became the second president of the Royal Academy of Arts. He became known for his dramatic historical and religious subjects. West taught the first generation of American artists, including Gilbert Stuart and Matthew Pratt. The finished version of Christ Rejected is monumental, at 16' x 23', and it hangs at the Pennsylvania Academy of the Fine Arts in Philadelphia.

Your current search criteria is: Object is "Study for "Christ Rejected".