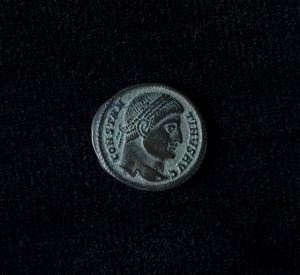 Coin of Constantine the Great


The reverse of this coin depicts a Roman army camp gate. The inscription translates as âTo the Foresight of our Emperorsâ in honor of Constantineâs imperial ancestors.

Constantine is depicted as the proud ruler, with three beaded strands tied around his head, rather than with the traditional laurel wreath of the victorious warrior. The inscription gives the Roman form of his name, Constantinus, with the abbreviation AVG for Augustus, the title conferred on emperors. Constantine, the first Christian emperor, chose the city of Byzantium (now Istanbul) as his capital and dedicated it to the Virgin Mary. He rebuilt it from 325 to 330 C.E. and decorated it with famous artworks from all over his dominions.

Provenance
Dr. and Mrs. Ralph Alexander, Rochester, NY; their gift to the Gallery in 1995
Keywords Click a term to view the records with the same keyword
Roman
portraits
1000 BCE - 500 CE
coins
Constantine the Great
Additional Images Click an image to view a larger version

Portfolio List Click a portfolio name to view all the objects in that portfolio
This object is a member of the following portfolios:
1000 BCE - 500 CE
Ancient Roman
Coins
Coins and Seals
Portraits
Web Links See links to web pages and lesson plans
MAGexplore MAGexplore provides in-depth information and close looking at over 200 objects in MAG's collection.

Your current search criteria is: Portfolio is "1000 BCE - 500 CE" and [Object]Object Type is "Numismatics" and [Object]Nationality is "Roman".