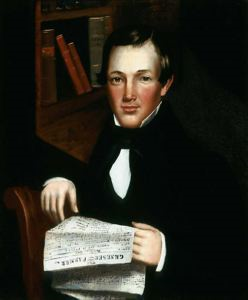 
The artist of the painting signed the back of the canvas with a flourish âAsahel Powers.â Powers was a self-taught portrait painter who traveled throughout the countryside in search of portrait commissions. Unfortunately, history has lost the name of this dapper gentleman who, we infer by the books and writing cabinet visible behind him, was a learned man of means. His interests and likely profession are further indicated by "The Genesee Farmer" in his hands, a popular journal dedicated to agriculture and horticulture founded in Rochester in 1831.

This portrait broadly tells the story of early Euro-American settlers who were cultivating and living off of the land of the Genesee Valley. It does not capture the story of the Indigenous people who had lived in those lands for hundreds of years prior to the arrival of the European settlers. Coincidentally, this portrait was painted during the infamous Trail of Tears, a brutal upheaval in American history over land rights in which the military forcibly moved over 60,000 Indigenous people (Cherokee, Chickasaw, Choctaw, Muscogee, Osage, and Seminole, including thousands of their Black slaves) to an undesirable stretch of prairie land, now in Oklahoma. During the forced march, many thousands of men, women, and children suffered and died from exposure, disease, and starvation.

Your current search criteria is: Object is "Portrait of a Dark-haired Man Reading the "Genesee Farmer".