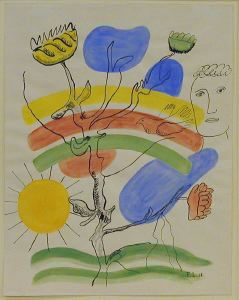 "After the Flood," the opening poem, begins:

As soon as the idea of the Flood was finished,
A hare halted in the clover and the trembling flower bells, and said its prayer to the rainbow through the spiderâs web.

Legerâs illustration reflects the notion of the day after the flood with a rapidly-drawn landscape: a shining sun, a rainbow, and trees and flowers rooted in a green ground. A man gazes on the scene with a detached, somewhat impenetrable expression. Many scholars consider Rimbaudâs dreamlike and visionary prose poems the foundation of modern European poetry. LÃ©gerâs symbolic and referential illustrations seem particularly fitting as complements.

Your current search criteria is: Object is "After the Flood (AprÃ¨s le dÃ©luge)".