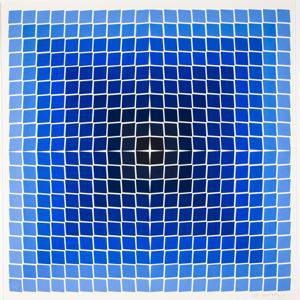 
Your eyes can play tricks on you. Depending on where you stand, you might see an âXâ in the center of Quasar+. As you step closer to the surface of the image, though, it might disappear.

In this print, Victor Vasarely arranges 400 parallelograms in the form of a square. The shapes are colored with a gradation of blues, ranging from a very light blue on the outermost perimeter to a near black in the center. The parallelograms touch one another at the central horizontal and vertical axes of the image, making this technically the most visually dense part of the image. Despite this fact, there is a strong possibility that your eye instead reads the diagonal lines that make up an âXâ shape as more visually dense.

Why does this happen? The movement suggested by the angled parallelograms and the increasing contrast towards the center of the image together create the effect of an X-shaped form bursting from the middle of the grid. Victor Vasarely regularly explored optical illusions in his work, based on his own explorations of how humans perceive color and shape.

Your current search criteria is: Object is "Quasar+".