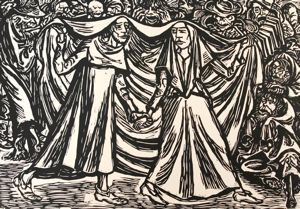 
Ernst Barlach was an Expressionist sculptor, printmaker, and playwright who worked in a wide range of media. Like many other German artists of the period, he initially believed that war could serve as a catalyst that would disrupt the artifice and spiritual complacency of contemporary German society. His time in the military exposed him to the horrors of war, an experience that frequently emerges in the dark intensity of his later work.

In the early 1920s, Barlach began to experiment with the medium of woodcut, looking back to the late medieval period for both style and subject matter.

Plate 4 of 7 from the portfolio The Transformations of God: Seven Woodcuts (Die Wandlungen Gottes: Sieben Holzschnitte)

Your current search criteria is: Object is "Dance of Death II (Totentanz II)".