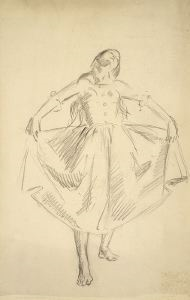 Angna Enters (ca. 1900 -1989) was known for performances that were often referred to as 'compositions in dance form' or 'episodes.' Enters used dance, mime, acting, costumes, music and sets to bring to life an array of characters from different times and foreign countries. Miss Enters was also an artist and exhibited paintings and drawings at The Memorial Art Gallery in November of 1936 and she performed in Rochester at least once in 1946.

Raised in Milwaukee, Enters moved to New York City in the early 1920's, where she enrolled in a life class taught by John Sloan at the Art Students League. Enters and Sloan met again several years later after a performance she gave in 1925. Sloan, Robert Henri and others were so impressed with Enters' performance that they created a committee to promote her work as they had done decades earlier for dance legend Isadora Duncan.

Bibliography
See general reference in Dorothy Mandel: "Uncommon Eloquence," Arden Press, Denver CO, 1986: p. 35. The text notes that Sloan sent the dancer his etching of her "Contra Danse" and that he sketched her at her performances for several years.

Exhibition List
This object was included in the following exhibitions:
Portfolio List Click a portfolio name to view all the objects in that portfolio
This object is a member of the following portfolios:
1900 - 2000
All Graphic Arts
Ashcan School
Drawings
Women

Your current search criteria is: Object is "Angna Enters Dancing".