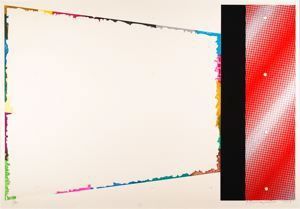 
Funasaka Yoshisuke represents the first generation of Japanese artists whose training and careers began after the end of World War II. Over the decades, he has created more than a thousand prints. His work is characterized by an insistent, repetitive combination of objects and shapes with color in his search for the ultimate expression of abstraction.

Red and White Space, No. 349 is but one example of hundreds of prints in which Funasaka uses circular dots, vertical and horizontal lines, and color to create a background and foreground suggestive of three-dimensional space. The works in his Space series, like the closely-related group of multiples My Space My Dimension, have similar titles distinguished at times only by a serial number. According to the critic Lawrence Smith, Funasaka thus âdissuades his viewers from looking for explicit meaning. Instead they can concentrate on his world of pure form, an austere and even restricted world of familiar shapes which reveals great subtleties on close scrutiny.â

Exhibition List
This object was included in the following exhibitions:
Bibliography
This object has the following bibliographic references:
Portfolio List Click a portfolio name to view all the objects in that portfolio
This object is a member of the following portfolios:
New Beginnings: Japanese Prints of the 1950s, 60s, and 70s
Screen Prints & Non-Prints
Serigraphs

Your current search criteria is: Object is "Red and White Space, No. 349".