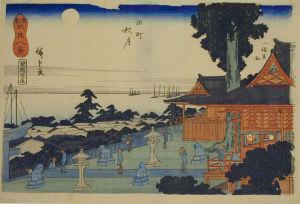 
"Autumn Moon at Tamachi" echoes "Autumn Moon over Lake Dongting." This print contains the publisher's seal only of Echizen-ya HeisaburÃ´. The script near the roof-beam of the red shrine names the building as the Hachiman Shrine, also known as Samezu Jinja or "Shark's Head Shrine" for the statue of the sacred Buddhist deity Kannon that a founding legend of Edo claims fishermen found in the belly of a shark pulled from the bay near this spot. The light of the harvest moon in this lovely autumn night view makes the city rooftops appear to glow whitely below the shrine to Hachiman, the god of war and one of the important cult deities of the Tokugawa house.

Bibliography
See general mention in Shozaburo Watanabe, "Catalogue of the Memorial Exhibition of Hiroshige's Works on the 60th Anniversary of his Death," 1918, p. 27; cat. no. 115 describes the set, Eight Views of Shiba, Yedo. [See http://www.hiroshige.org.uk/hiroshige/watanabe/catalogue_103_133.htm, no. 115.] This print is entitled "Tamachi no Shugetsu" or "Autumn Moon at Tamachi."
Keywords Click a term to view the records with the same keyword
Japanese
Ukiyo-e
Additional Images Click an image to view a larger version

Exhibition List
This object was included in the following exhibitions:
Portfolio List Click a portfolio name to view all the objects in that portfolio
This object is a member of the following portfolios:
1800 - 1900
All Graphic Arts
Japanese Art
Relief Prints
Web Links See links to web pages and lesson plans
Catalogue of the Memorial Exhibition of Hiroshige's Work Online version of Shozaburo Watanabe's book: Catalogue of the Memorial Exhibition of Hiroshige's Work on the 60th Anniversary of his Death, Tokyo: Ukiyoye Association, 1918. This work is listed under catalogue no. 115, Tamachi No Shugetsu, Autumn Moon at Tamachi.

Your current search criteria is: Object is "Autumn Moon at Tamachi".