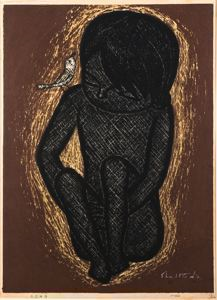 
Boy with Bird depicts a nude boy, his legs drawn to his chestand surrounded by a womblike halo of light, with a small bird perched on his right shoulder.
This is an enigmatic print made by one of the most famous Japanese artists of the 1960s and 1970s. Masuo Ikeda was known in his home country as a maruchi taranto, or multiple talent. His greatest interest during high school was not art, but the western literature and philosophy by writers as diverse as Sartre, Kafka, and the Surrealists.

Self-taught as an artist, Masuo struggled financially until the early 1960s, when he turned from painting to printmaking. He won several prizes in Japan, but achieved his greatest triumphs abroad, including a one-man show in 1965 at the Metropolitan Museum of Art in New York. It was the first time in history that MoMA had so honored a Japanese artist.

Your current search criteria is: Object is "Boy with Bird".