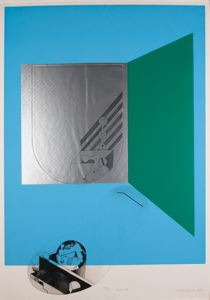 
Takesada Matsutani is a contemporary artist known for his multimedia work. In 1963, he joined the Gutai group, the first radical post-war art collective in Japan. Founded in 1954 and disbanded in 1972, this group was instrumental in creating large-scale multimedia environments, performances, and theatrical events. Matsutani maintained his commitment to the aesthetic and conceptual statements of the movement even after his move to France in 1966.

Although the context remains unknown, Room â69 surely represents the design for an installation space. Installation and performance art remain critical to Matsutaniâs work today; he included performance in his first retrospective in the United States, which was held in New York in spring 2013.

Your current search criteria is: Object is "Room '69".