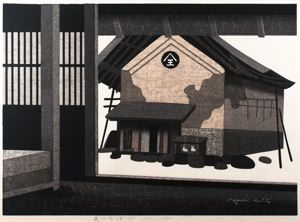 Saito Kiyoshiâs fascination with his birthplace of Aizu, in Fukushima Prefecture, resulted in the longest-running series of his career. The first print was done in 1939; he completed the 41st, called Winter in Aizu, in 1980.

Barn in Aizu is an example of Saitoâs later work, in which he seeks to represent the essence of nature and the intellectual beauty of architecture through the use of a muted color palette, the wood grain of the block, and a somewhat flattened two-dimensional picture plane.