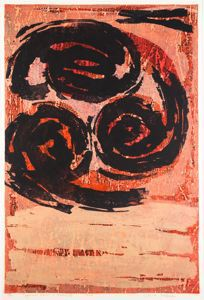 
From the beginning of his career, Takagi Shiro was interested in the print medium. In 1958, he left his studies at the Musashino College of Fine Arts in Tokyo because there was no print faculty, choosing instead to learn independently. Despite his interest in abstraction, however, his primary artistic identification remained Japanese.

With its characteristic abstracted forms in a red and ochre palette, Japanese Form (Tomoe) is representative of Takagiâs work before 1971. The word tomoe refers to a specifically Japanese abstract shape, a swirl that resembles a comma. Although its meaning is debated, the form itself is a common design element in Japanese family emblems.

Provenance
Purchased from exhibition "Contemporary Prints from Japan - II" through Oregon State University by the Gallery, 1966
Keywords Click a term to view the records with the same keyword
Japanese
Additional Images Click an image to view a larger version

Exhibition List
This object was included in the following exhibitions:
Portfolio List Click a portfolio name to view all the objects in that portfolio
This object is a member of the following portfolios:
Japanese Art
New Beginnings: Japanese Prints of the 1950s, 60s, and 70s

Your current search criteria is: Object is "Japanese Form (Tomoe)".