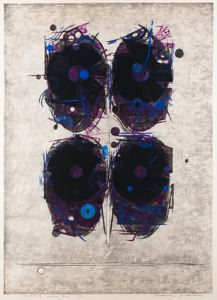 
Yoshida Hodakaâs prints combine an awareness of and training in traditional techniques with his interest in other cultures and beliefs; these include not only Buddhism, but ancient pre-Columbian ceremonies, mythology, and folk art.

With its dense blue and purple forms that resemble the inkblots of psychological tests, Ceremony, Blue dates to about 1960, and originates from the latter part of the artistâs âprimitiveâ period. He uses color and form in an attempt to access the most elusive of subject matter, universal human spirituality. Ceremony, Blue is perhaps his effort to create, as one critic called it, an image of something âalmost human,â or âsomething human sensed as âpresent, but not visible.ââ

Provenance
Purchased from exhibition "Contemporary Prints from Japan - II" through Oregon State University by the Gallery, 1966
Additional Images Click an image to view a larger version

Your current search criteria is: Object is "Ceremony, Blue".