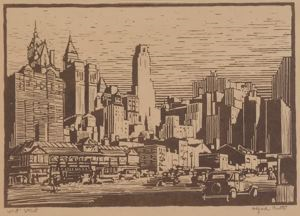 
Like Rochesterian Walter Cassebeer, Alfred Butts was also an architect in New York City. He lost his job in 1929, and it may have been during the early 1930s that he created prints like this one of West Street in Lower Manhattan to generate some income. In addition to using his artistic skills to solve his financial problems, he turned his attention to the creation of a game that would capitalize on his love of crossword puzzles â and that game became ScrabbleÂ®.

West Street, the subject of this print, did not have as successful an outcome. A portion of it is within the security perimeter of the of the World Trade Center site, and a number of the landmark buildings on West Street sustained significant damage. There has been a movement to rename the street âHighway of Heroesâ to commemorate efforts of the many valiant people who responded during the 9/11 disaster.

Exhibition List
This object was included in the following exhibitions:
Portfolio List Click a portfolio name to view all the objects in that portfolio
This object is a member of the following portfolios:
1800 - 1900
1900 - 2000
20th Century American Art
All Graphic Arts
Cityscapes
New York City
Relief Prints

Your current search criteria is: Object is "West Street".