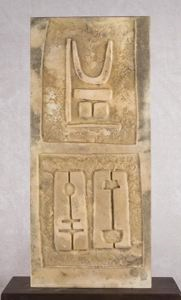 
Decades ago, one of the prizes awarded at the Rochester-Finger Lakes Exhibition was a one-person show the following year. Norman Daly, a professor of art at Cornell University, received that honor in 1963 and this double-faced marble tablet was purchased for the permanent collection. It prefigures Dalyâs greatest achievement: his invention, in 1972, of an entire civilization and an exhibition based on artifacts supposedly excavated from its ruins. Always interested in the art produced by ancient cultures, Daly created fragments of wall paintings, votives, tools, weapons, jewelry, and other objects from the mythical civilization of Llhuros, many of which resembled our double-sided Ceremonial Desert Form. The upward-reaching figure is a recurrent motif in his work.

Your current search criteria is: Object is "Ceremonial Desert Form".