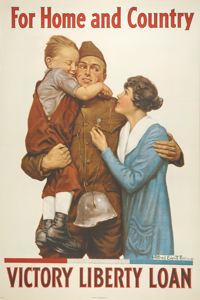 
During five Liberty Loan campaigns, Americans bought twenty billion dollars in bonds to support the war. The final campaign, the Victory Liberty Loan, began after the war ended. The government still needed to pay for the travel, medical care, shelter, and sustenance for the millions of American soldiers remaining in Europe.

The reunion of this idealized, Anglo-American family illustrates the ideal outcome of the war. A healthy soldier/husband returns from the war into the loving arms of his wife and son. The German helmet that hangs from the soldier's neck, a common war trophy, strikes a somewhat brutal and discordant note to our modern eyes.

Exhibition List
This object was included in the following exhibitions:
Portfolio List Click a portfolio name to view all the objects in that portfolio
This object is a member of the following portfolios:
20th Century American Art
All Graphic Arts
Calling Every Man, Woman and Child!: American World War I Posters
Planographic Prints
Web Links See links to web pages and lesson plans
World War I Posters Lesson Plan Lesson plan around MAG's collection of World War I posters

Your current search criteria is: Exhibition is "Calling Every Man, Woman and Child: American World War I Posters".