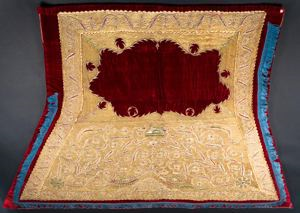 
When the Russian Imperial Army conquered the Emirate of Bukhara, one of three Uzbek dynasties, in 1868, only Bukhara retained a degree of independence as a Russian protectorate. Lavish ambassadorial gifts from the emirs to the tsars were obligatory, a diplomatic tradition that had developed over centuries. Examples included textiles, furniture, and weapons; among the most luxurious offerings were ceremonial horse covers and blankets embroidered in gold by the elite craftsmen of the Bukhara court.

This elaborate horse cover, which is lined with a traditional ikat-patterned fabric from Uzbekistan (see inset), was probably presented by the emir of Bukhara to the Russian imperial court during the late 1800s. The images of the sphinx and cannons embedded within the golden embroidery and floral patterns quite likely reference famous imperial landmarks in the Russian cities of Moscow and St. Petersburg.

Bukhara is in present-day Uzbekistan.

Your current search criteria is: Object is "Ceremonial Horse Cover".