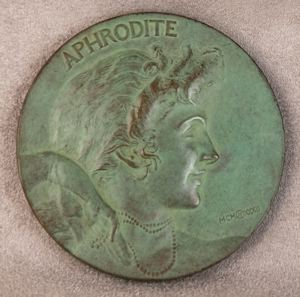 
6th medal issued by the Society of Medalists

This bronze medal is the sixth issue by the Society of Medalists, which from 1930 to 1995 released 129 limited-edition medals to subscribing members. In the words of artist John F. Flanagan:

âThis medal gets its inspiration from classical antiquity . . . the Swift Runners grasping the torch from the failing hands of the runner exhausted in the race is derived from the Lampadedromia, the Greek and Roman torch foot-race, in which the light is passed from one runner to the next waiting relay, competing with other lines of racing torch bearers.â

Marks
On face - head of Aphrodite, "Aphrodite"; On reverse - athlete handing torch to runners, "Swift Runners"
Keywords Click a term to view the records with the same keyword
medals
Additional Images Click an image to view a larger version

Your current search criteria is: Related to "John F. Flanagan".