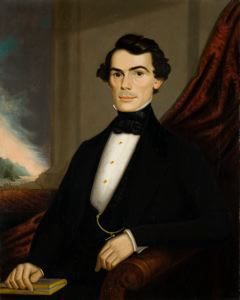 The Dixon family lived north of New York City, first in Hudson, NY and then in Tarrytown, NY.
Although painted separately, Mr. and Mrs. Dixon appear to share a couch against a large window through which an elaborate landscape can be seen. Both are dressed in stylish and sophisticated attire. Hiram W. Dixon was the owner of a hardware store in Hudson. In 1856, Mr. Dixon was elected a messenger of the Electoral College to carry the vote to Washington. A newspaper article reported that each year he âpredicted the election returns and his selections were as predictable as the Gallup polls.â In 1864, he was a director of The First National Bank of Hudson and in 1866, appointed postmaster of the Hudson post-office.
In 1866, the family became members of the First Reformed Protestant Dutch Church in Hudson. Mr. Dixon was also involved in real estate and insurance in Tarrytown where there is a street named for him.
Text Panel, Oct. 2010, Colleen Piccone

Bibliography
This object has the following bibliographic references:
Related Siblings(s) Click a record to view

Farmers Bank Note
2010.10
Portfolio List Click a portfolio name to view all the objects in that portfolio
This object is a member of the following portfolios:
19th Century American Art
From Rochester Collections
Men
Portraits

Your current search criteria is: Related to "Jefferson Gauntt".