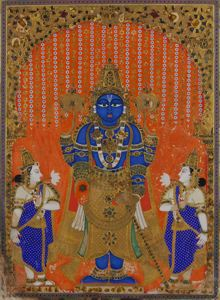 
Originating in South India during the Maratha period in the 1600s, these Hindu paintings of gods, made to serve as a symbol of the deity himself, were used in private prayer rooms. The image in this Tanjore painting is that of Vishnu, one of the three major gods of the Hindu pantheon, is the preserver of creation who often comes to earth as a man when good and evil are out of balance.

Historic Tanjore painting bears several unmistakable traits that distinguish it from other Indian painting. Key characteristics include a larger than life god figure with a perfect round head and almond eyes; a bold color palette, often with a red background; and columns or curtains used as a framing device. These sacred paintings also have a three-dimensional surface covered with gold leaf and embossed with precious stones, glass, or metal. The result shines with a depth and richness worthy of the gods they denote.