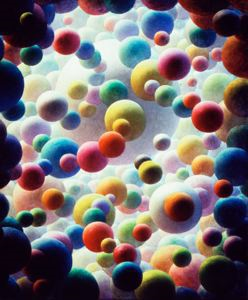 
For thirty-three years Fritz Trautmannâs passion for painting inspired his students in MAGâs Creative Workshop. Over his lifetime, he developed an approach to color that was scientific as well as mystical, and in 1942 he painted Galaxy to teach his theories to students. MAG purchased the painting from the artist in 1956. It has been a visitor favorite ever since.

Despite appearances, not a single drop of black paint was used, as Trautmann believed it dampened the natural vibrations of color. Focusing on what he considered the four primary colors rather than the traditional three, Trautmann wrote,

Galaxy symbolizes the great truth that every phenomenon in life involves ALL of life. Each globe of Galaxy is composed of EXACTLY THE SAME ELEMENTS. The entire spectrum wraps itself around each globe with unvarying uniformity. Warm red plays across the field from the left, bright yellow streams down from above, cold blue comes in from the right, and deep violet rises from the bottom.

Exhibition List
This object was included in the following exhibitions:
Bibliography
This object has the following bibliographic references:
Portfolio List Click a portfolio name to view all the objects in that portfolio
This object is a member of the following portfolios:
1900 - 2000
20th Century American Art
All Paintings
Rochester Artists
Web Links See links to web pages and lesson plans
FRITZ TRAUTMANN: TEACHING AND COLOR THEORY Excerpts from Fritz Trautmannâs writings on art, from the artist's notebooks housed in the Memorial Art Gallery Archives
Episodes from an Unwritten History: Claude Bragdon & Fritz Trautmann Brochure accompanying an exhibition at the Memorial Art Gallery from August 13-December 12, 2010.
MAGexplore MAGexplore provides in-depth information and close looking at over 200 objects in MAG's collection.