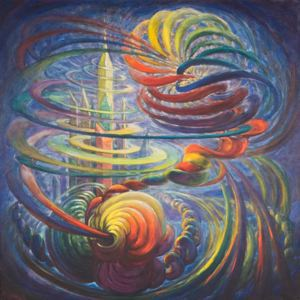 
The architect and designer, Claude Bragdon, introduced his friend Fritz Trautmann to magic squares, in which arranged numbers equal the same amount in the verticals, horizontals and long diagonals. In lines that follow the numbers of a magic square in their natural order (1, 2, 3â¦), Trautmann observed orbital patterns replicating natural forms. On March 4, 1912 Bragdon wrote in his diary, âTrautmann [has] discovered the spiral law of space.â From this, Trautmann developed his Principal of the Orbit, a philosophical explanation for creation, evolution, and existence:

âI am borne spinning along in the great whirlpool of evolution. It is because I am a child of nature that I am able to conceive only spinning and spiraling things â whirling worlds, universes of nebulae, stars, planets, satellites; universes of molecules, atoms, electrons, protons; universes of embryos, nuclei, chromosomes, genes. By reflection I rotate; my universe turns because I myself turnâ¦my sphere of activity assumes an orbital motion because I am the spinning center of it.â

Exhibition List
This object was included in the following exhibitions:
Bibliography
This object has the following bibliographic references:
Portfolio List Click a portfolio name to view all the objects in that portfolio
This object is a member of the following portfolios:
20th Century American Art
From Rochester Collections
Rochester Artists
Web Links See links to web pages and lesson plans
FRITZ TRAUTMANN: TEACHING AND COLOR THEORY Excerpts from Fritz Trautmannâs writings on art, from the artist's notebooks housed in the Memorial Art Gallery Archives
Episodes from an Unwritten History: Claude Bragdon & Fritz Trautmann Brochure accompanying an exhibition at the Memorial Art Gallery from August 13-December 12, 2010.