E. E. Cummings: Sketches & Watercolors of the Twenties and Thirties 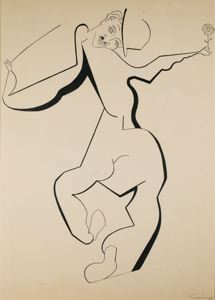 
E.E. Cummings was an accomplished visual artist as well as one of America's greatest poets. Some of his early work was reproduced in The Dial, a magazine that was published from 1920 - 1929. The Dial's offerings included prose, poetry, critical reviews, as well as visual arts. Because of Cummings' friendship with the publisher, James Sibley Watson, Jr., he had an early relationship with the publication, which published his poems, his essays, and his drawings. James Sibley Watson, Jr., also provided Cummings with an apartment at 4 Patchin Place in Greenwich Village.

Watson, who along with his wife Hildegarde Lasell Watson, were supporters of a number of other artists, including sculptor Gaston Lachaise. He was the son of Emily Sibley Watson, who founded the Memorial Art Gallery of the Unversity of Rochester in 1913.

Exhibition List
This object was included in the following exhibitions:
Bibliography
This object has the following bibliographic references:
Portfolio List Click a portfolio name to view all the objects in that portfolio
This object is a member of the following portfolios:
1900 - 2000
All Graphic Arts
Connoisseurs Around the Corner: Gifts of Art from MAGâs Founding Family
Drawings
It Came from the Vault: Rarely Seen Works from MAGâs Collection
Jobs & Work
Selected Sibley & Watson Family Gifts
Works published in The Dial
Web Links See links to web pages and lesson plans
The Dial's "White-Haired Boy": E. E. Cummings as Dial Artist, Poet, and Essayist Article on Cummings poetry and art in the early issues of the Dial Magazine. Dial was edited by Dr. James Sibley Watson, Jr. (son of Memorial Art Gallery founder Emily Sibley Watson) and Schofield Thayer. Watson, Thayer & Cummings were students at Harvard together.
It Came from the Vault exhibition catalogue Entry for this artwork in the It Came from the Vault exhibition catalogue. The exhibition ran from March 17-June 9, 2013

Your current search criteria is: Exhibition is "E. E. Cummings: Sketches & Watercolors of the Twenties and Thirties".