Art in the Embassy 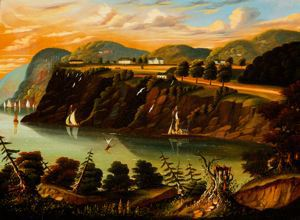 
At a time when there was no photography, videography, or cinema, people relied on landscape paintings to be their windows onto the world beyond their immediate horizons.

Thomas Chambers capitalized on people's interest in the American landscape. He is noted for his many picturesque views of early 19th-century America, including this one of the United States Military Academy at West Point on the Hudson River. Chambers worked from personal observation, but also consulted many British and American prints for his paintings.

You should not be surprised if you visit other museums and see a painting similar to this one. At least six other views of West Point were painted by Chambers.

Provenance
Elsie McMath Cole, Rochester, NY; given to the Gallery in 1943
Keywords Click a term to view the records with the same keyword
19th century
rivers
landscapes
1800-1900
paintings
boats
Additional Images Click an image to view a larger version

Exhibition List
This object was included in the following exhibitions:
Bibliography
This object has the following bibliographic references:
Portfolio List Click a portfolio name to view all the objects in that portfolio
This object is a member of the following portfolios:
1800 - 1900
19th Century American Art
All Paintings
Landscapes
Seeing America
Transportation
Web Links See links to web pages and lesson plans
Seeing America Inservice Materials from a teacher in-service presentation Spring 2008
Seeing America Chapter on Thomas Chambers' View of West Point, written by Peter Ogden Brown.

Your current search criteria is: Exhibition is "Art in the Embassy".