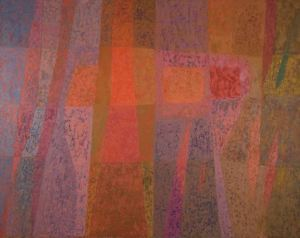 
George Morrison worked in a variety of styles throughout his long and illustrious career, but he is best known for works that appear to straddle the space in between abstraction and landscape.

After graduating from the Minneapolis College of Art and Design, Morrison received a scholarship in 1943 to attend the Art Students League in New York City. In 1953 he was awarded a Fulbright Scholarship to study at the Ãcole des Beaux-Art in Paris. Morrison taught at Cornell University and Penn State before accepting an assistant professorship in 1963 at the prestigious Rhode Island School of Design.

Morrisonâs work encompasses the spiritual significance of his Native American heritage, the density of urban centers, and the sparseness of life in vast, rural spaces. As the artist himself once stated:

I seek the power of the rock, the magic of the water, the religion of the tree, the color of the wind, and the enigma of the horizon.

Provenance
Grand Central Art Galleries, New York; purchased from them by the Gallery in 1958
Keywords Click a term to view the records with the same keyword
American art
20th century
Abstract
shape
Additional Images Click an image to view a larger version

Your current search criteria is: Exhibition is "[Unidentified exhibition]".