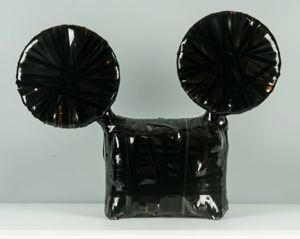 
Collaborative artists Sandra Gibson and Luis Recoder have encased a 16mm projector with film, mummifying the object with its own innards. A still life of motion picture phenomena, Threadbare offers a new way to look at film, not as a moving image but as a motionless and silent sculptural object.

Your current search criteria is: Portfolio is "Recent Acquisitions" and [Object]Object Type is "Sculpture".