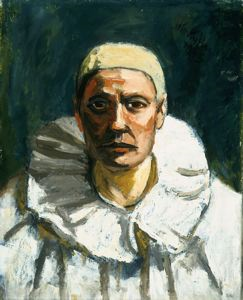 
Walt Kuhn received great acclaim during his lifetime for the bold simplicity and emotional intensity of his paintings of vaudeville and circus performers. Kuhn was also one of the principal organizers of the landmark and pioneering Armory Show of 1913, which introduced the American public to avant-garde European art and helped change the course of painting and sculpture in the United States.
?
[Forman Gallery, Summer 2015]

Exhibition List
This object was included in the following exhibitions:
Bibliography
This object has the following bibliographic references:
Portfolio List Click a portfolio name to view all the objects in that portfolio
This object is a member of the following portfolios:
1900 - 2000
20th Century American Art
All Paintings
Encyclopedia Britannica Collection
Men
Portraits

Your current search criteria is: Portfolio is "Encyclopedia Britannica Collection".