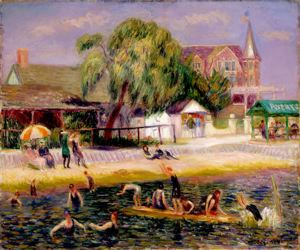 
Like many American painters, including Winslow Homer, William Glackens was an artist-reporter early in his career. He met Robert Henri in Philadelphia, shared a studio with him, and went to Paris with him in 1895. Upon Glackens's return, he moved to New York City. He exhibited with The Eight in 1908, and chaired the Armory Show in 1913. By 1914, he was devoting all of his time to painting, and espoused subjects like this one, colorful depictions of Americans at play. Many of his paintings reflect the influence of French impressionists, particularly Pierre Auguste Renoir.

Provenance
Consigned to Kraushaar Galleries, New York, mid 1930's; returned to artist's estate upon his death in 1938; consigned to Kraushaar Galleries, New York, early 1970's; purchased from them by the Gallery in 1973 with funds bequeathed by Elizabeth R. Grauwiller
Keywords Click a term to view the records with the same keyword
20th century
Ashcan School and friends
leisure activities
seascapes
1900-2000
paintings
Additional Images Click an image to view a larger version