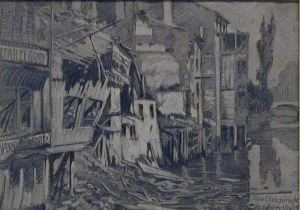 
Object Type: Drawing
Medium and Support: Graphite with gouache on paper
Credit Line: Gift of John A. and Jeanne P. Wenrich
Accession Number: 2003.98
Link to this object
Location: Not currently on view

Exhibition List
This object was included in the following exhibitions:
Portfolio List Click a portfolio name to view all the objects in that portfolio
This object is a member of the following portfolios:
1900 - 2000
Calling Every Man, Woman and Child!: American World War I Posters
Drawings
Web Links See links to web pages and lesson plans
World War I Posters Lesson Plan Lesson plan around MAG's collection of World War I posters