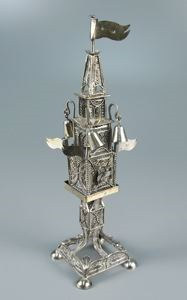 The conclusion of the Sabbath is marked by the havdalah ceremony, which separates sacred from secular time. All the senses are evoked during this ancient ritual; to excite the sense of smell, fragrant spices, often enclosed in ceremonial objects, were passed among those present. The tower form as a spice container first appears in the 1500s.

Provenance
Dr. and Mrs. Raymond H. Schneider, New York, NY; their gift to Central Synagogue, New York, NY; purchased from them by the Gallery in 2006
Keywords Click a term to view the records with the same keyword
bsamim
judaica
Additional Images Click an image to view a larger version

Your current search criteria is: Portfolio is "Judaica" and [Objects_1]Sort_Artist contains "Unknown, Austrian".